It’s been a hotly contested and competitive day of action in both the Men’s and Women’s divisions for day two of the CARVE Great Lakes Pro World Surf League (WSL) Qualifying Series (QS) 1000 event. Round 2 was completed in 2-3 foot waves at north Boomerang as the event inched closer towards the pointy end of the competition.

In her second round heat, Victorian big wave dynamo Arabella Wilson was able to take advantage of a couple of long running rip bowl sections to get a heat win and move on through to the the third round. Wilson is in a bid to gain a strong result after her fifth place finish at the first QS event of the year at Phillip Island in Victoria.

“It’s lovely to be out here in some warmer water as opposed to Victoria,” Wilson said. “I thought if I was able to distance myself from the other girls in my heat, I’d be able to generate my own opportunities and give myself the best chance at a heat win. The waves have been pretty average back home in Victoria since the 50 Year Storm event last year. It’s great to surf some smaller, fun and peaky conditions up here at Boomerang and get a win in a QS event.”

Another standout performer from the Women’s field was Jesse Starling who was able to bank two strong scores early in the heat to oust her fellow competitors and get a heat win at a location that she has spent plenty of time at.

“Originally from North Narrabeen, I have made plenty of trips up here to Boomerang and the Great Lakes,” Starling said. “I absolutely love this area and always enjoy coming to this beautiful location. I’m really hoping to get plenty of competition experience out of all the events in the Vissla NSW Pro Surf Series, making a couple of heats is always an added bonus”. 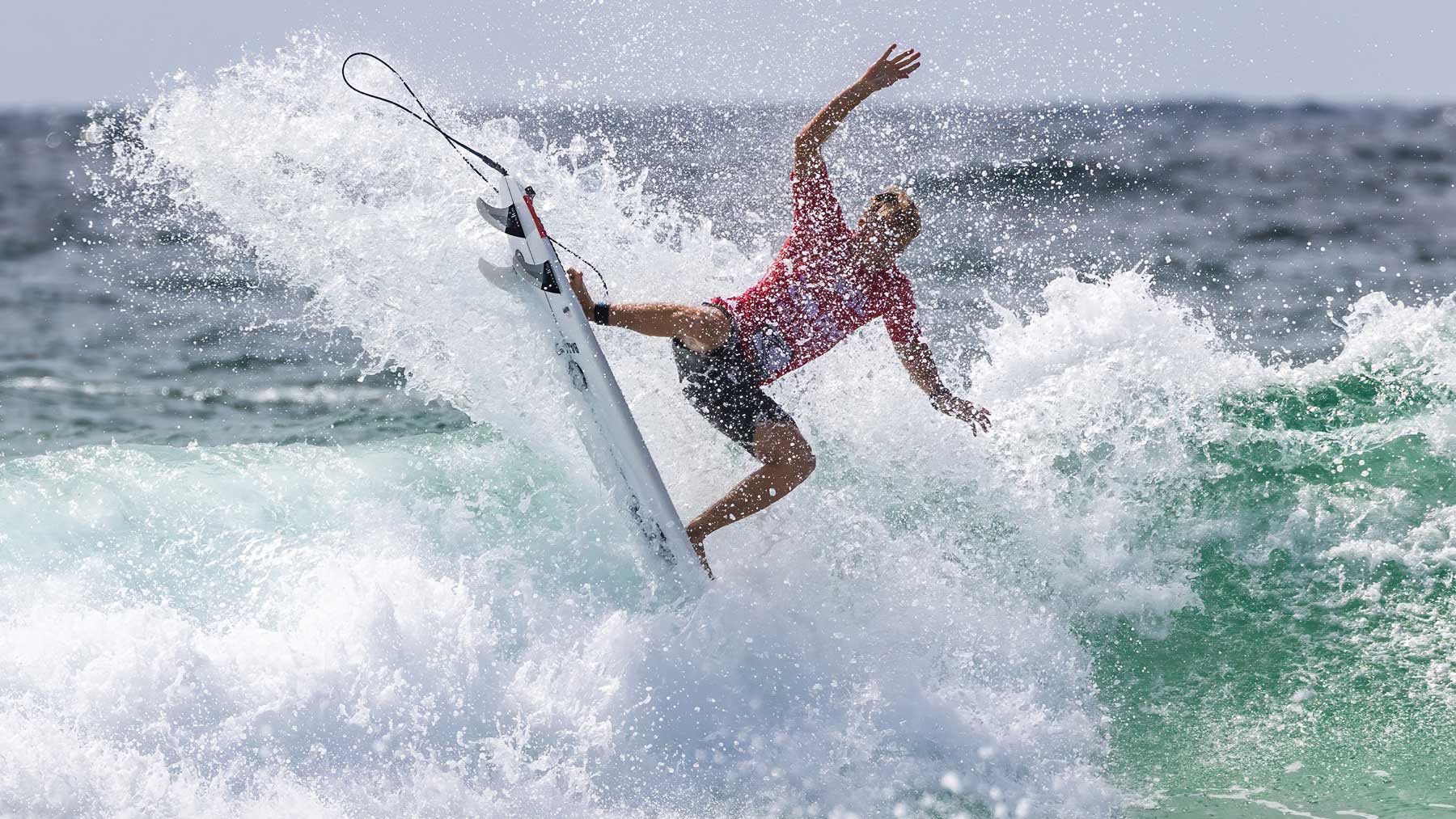 On the Men’s side of the draw, the Men’s Round of 64 got underway with Australia and New Zealand’s best  advanced.

The first heat of the Men’s draw pitted dynamic natural footer Kalani Ball (pictured above, photo by Natalie Meredith) against Nick Vasciek, Koda Killorn and Harry Phillips. The Stanwell Park local was able to effortlessly post two big scores including an entertaining last wave. He took to the air and was awarded with an 8.00 point ride taking his heat total to 15.00 out of a possible 20 points.

“The waves were tricky out there but I was pumped to find a couple of steep sections to hit. To get a win in my first heat on the QS this year is pretty exciting”, Ball said. “I’ve been coming to the Boomerang area since I was a kid and really enjoy surfing here and catching up with mates. I’m looking forward to hopefully getting some more waves here at Boomerang and throughout the rest of the year”.

Defending event champion Reef Heazlewood was quick to get his 2022 QS campaign off the ground. The Sunshine Coast surfer has had a taste of the World Championship Tour as a wildcard but is yet to secure a full-time position. Heazlewood took a commanding win in his round two heat today. The classy goofy-footer was able to find multiple opportunities and show off his elite rail-game resulting in a 7.50 and 7.00.

“I’m really looking to back up my 2021 event win and qualify for the Challenger Series events,” said Heazlewood. “The waves are looking like they are going to be fun over the next couple of days and I’m pumped for the rest of the event.”

Top seed in the Men’s draw Matt Banting, was pitted against local wildcard Zeb Watts, powerful natural footer Xavier Huxtable and local surfer Ross Cadden. Banting was able to show off his credentials as a former CT competitor and secure a spot in the second round with some strong backhand surfing in what was a tight back-and-forth heat between all four competitors.

“It’s really great to throw the jersey back on after ten months out with injuries and COVID interruptions here at the Carve Great Lakes Pro,” Banting said. “I’ve been coming to Boomerang since my days as a junior in the State Titles and it’s awesome to be back surfing against the best guys from around Australia and New Zealand. It’s going to be a tight race for those 10 Australian New Zealand places into the bigger events at the backend of the year. I’m really hoping I can be there.”

Other surfers to advance through to the third round of the Men’s draw included New Zealand pair Billy Stairmand and Te Kehukehu Butler, former world tour competitor Stu Kennedy and Xavier Huxtable.

Competition is set to resume tomorrow morning at North Boomerang Beach with Women’s Round 3 hitting the water at 7:30 a.m. AEDT followed by the Women’s top seeds in Round 3.