Quarterfinalists have been decided on a marathon day of professional surfing at Avoca Beach as we inch closer to crowning our event champions at the Vissla and Sisstrevolution Central Coast Pro presented by Mad Mex, a World Surf League (WSL) Qualification Series (QS) 3,000 event.

The finals are fast approaching and Thursday dished up clean two-to-three foot waves at The Pines at Avoca Beach with the Round of 16 taking place in both fields. The first round of the Central Coast Pro Junior supported by Regional NSW was also run in picturesque Central Coast conditions.

Kicking off the morning was the Women’s Round of 16 with big names in and out of the draw. Only the top two surfers in each heat move through to the Quarterfinals tomorrow and Back-to-back event winner Nyxie Ryan was one of the first casualties of the morning.

It was an intense heat from the outset with the lead changing on multiple occasions. Picklum found a few mid range scores early to put the pressure on the field, however Stoyle was able to fire back a shot of her own to keep Picklum accountable dropping a strong score of her own for some big forehand carving maneuvers.

Stoyle and Picklum used their extensive competitive experience to surf smarter not harder, scoring maximum points on only a couple of waves where Ryan and Lorenston couldn’t find enough opportunities to move ahead.

“That was such a fun heat out there and once again Avoca is pumping and we’ve got beautiful weather and waves,” Stoyle said. “It’s so lucky when we can score awesome waves in an event because it truly shows how good everyone is surfing in the event. The tide was filling in fast this morning and I tried to adjust my tactics accordingly and luckily it was able to pay off”.

To continue the eventful morning, Sunshine Coast surfer Sophie McCulloch narrowly secured a heat win in another heat of top talent. McCulloch started strong however remained in second place till the dying stages. She used priority to her benefit and secured her best score on her backhand to get a win and keep her momentum rolling.

“It feels so good to get a win out here at Avoca and to book a spot in the Quarterfinals,” McColluch said. “I’m really enjoying being back in the jersey at this event after not surfing since the Phillip Island QS 1,000 which I was lucky enough to take out down south in Victoria. I’m feeling refreshed and ready to try and continue some solid form here at Avoca.”

There wasn’t any pause in action as the Men’s draw with the excellent conditions continuing. Culburra surfer Jordin Watson scored one of the highest heat totals of the day in his Round 4 matchup. He utilised his competitive experience to wait for his turn in priority and capitalise posting a huge 7.23 awarded for a series of big backhand snaps.

“I’m feeling great and really confident in these lefts and hope I can keep this form going through the rest of the event,” Watson said. “I was definitely a bit edgy and nervous early on hearing all the guys getting good scores but I just tried to concentrate on what I could control and it paid off for me.”

Kalani Ball (Stanwell Park) also surfed a smart and composed heat that came down to the final two minutes where he moved from fourth into first with a huge 6.67. Ball used an array of backhand maneuvers on a long running left hander to cause damage and move on through to finals action.

“I was feeling pretty nervous going into the back end of the heat but tried to stick to my guns and surf my last wave as best as I could to get that last score,” Ball said. “My strategy before the heat was to try and wait for the bigger sets and stay composed and luckily enough I was able to get going in the backend and secure that win with some of the tactics I had”.

Rewind all the Day 4 action on catchup here 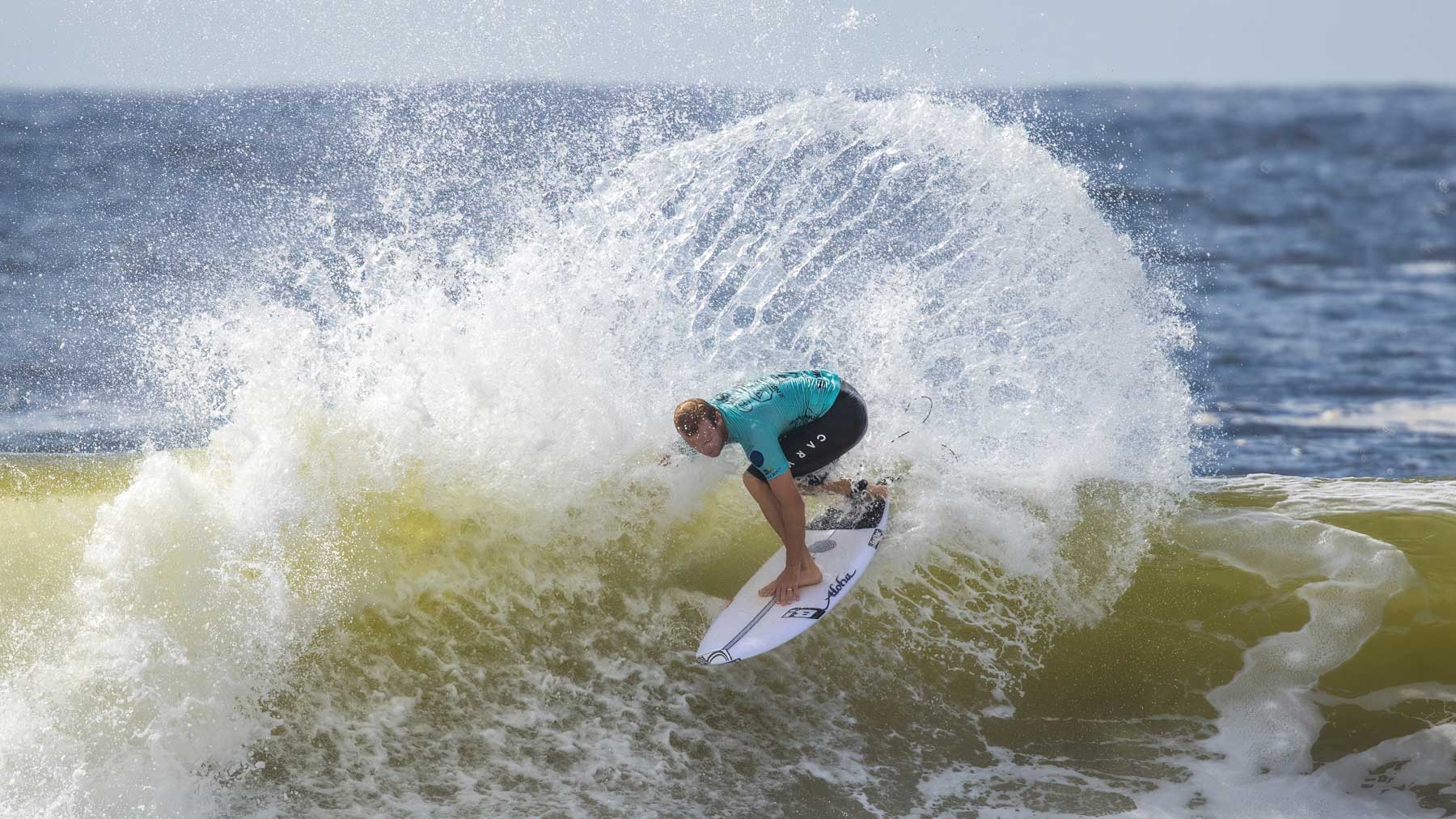 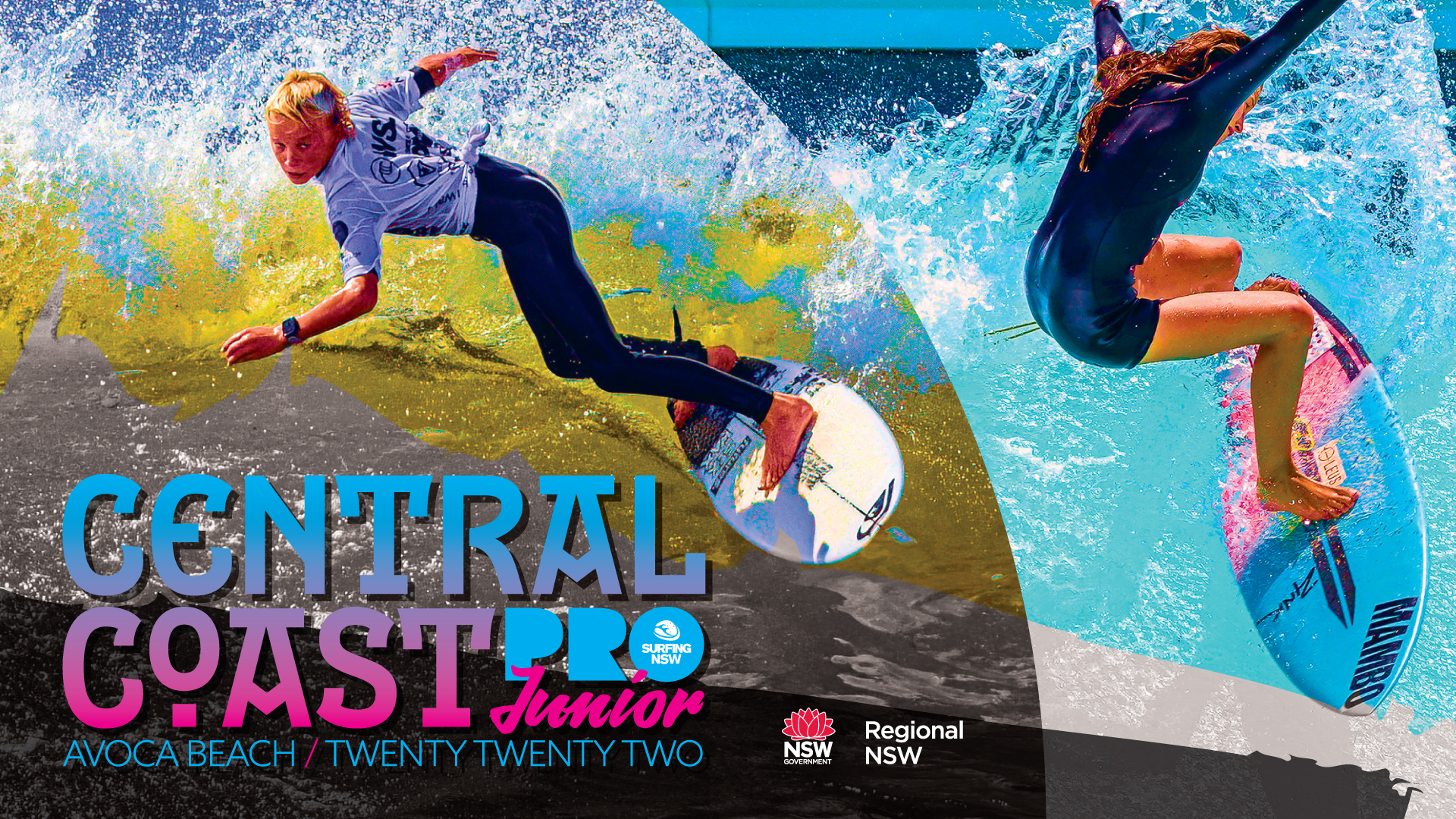 The Central Coast Pro Junior supported by NSW Regional rounded out the day with surprise last minute entries from big names and amazing results. The sport’s up and coming stars are looking to boost their Junior Tour rankings in the second of three Australian events in an effort to secure a spot on the World Junior Championships, a path trodden by many World Champions and WCT surfers.

In the Women’s field, Ellie Harrison (Barwon Heads) wasted no time in continuing her dominance at the Lake Macquarie Pro Junior with a first round heat. The Victorian pocket rocket was in control from the outset as she tucked away two good scores to hold her in good stead and give her a bunch of confidence as she moves through to the next round along with North Narrabeen’s Sydney Chevalier.

“It’s awesome to be through to the next round of the event in really fun waves,” Harrison said. “It’s great having so much support up here from my fellow Victorians who have really banded together and supported myself and the rest of the crew. Hopefully I can keep it going and win the event.”

One of the highlights of the Men’s field was the performance of Avalon Beach’s Arch Whiteman who used his silky forehand attack to nail some big scores for a Round of 32 heat win showing off his credentials as a rising star of the surfing fraternity.

Whiteman took on Jay Occhiluopo (son of Mark Occhiluopo ‘99 World Champion). The pair being second generation pro surfers would have brought flashbacks for some, in a twist of fate Whiteman (son of ‘90s Pro Junior Champion Dean Whiteman) and Occhiluopo’s dad’s both competed against each other as kids.

“I’m frothing that I was able to make that last heat in some amazing waves,” Whiteman said. “I felt like there was so many waves and opportunities out there for our turn in the lineup and I was stoked that I found a couple of good scoring waves including that 7.17.”

Surfers to also advance in the Pro Junior divisions included local CT surfer Molly Picklum (Avoca) who scored a whopping 15.67 total and Shyla Short (Illawarra) in the Women’s field whilst Oliver Ryssenbeek (Merewether) and Tom Whitpaine (Burleigh Heads) were other standouts in the Men’s field.

Competitors will reconvene at Avoca Beach at 7:30 am for the QS 3000 event as well as the continuation of the Central Coast Pro Junior. Quarterfinal action in the Women’s division will kick off the day.

The 2022 Vissla and Sisstrevolution Central Coast Pro will run at Avoca Beach from March 14 – 19 with the Central Coast Pro Junior running 17 – 19. For more information, results and live broadcast, head to www.worldsurfleague.com or download the free WSL App.